The global food price crisis threatens to cause a global nutrition crisis: New evidence from 1.27 million young children on the effects of inflation

Food prices are skyrocketing around the world. In January, international prices for major food items climbed to a level near the heights of the global food price crises of 2007-08 and 2010-11, according to the FAO Food Price Index (Figure 1). The spike has raised concerns over the potential for another global food crisis, increasing hunger among the poor and, possibly, social unrest around the world.

Are these worries justified? The short answer is both no and yes. Food markets are in better shape now than during the crisis of a decade ago, with reasonable-to-good harvest prospects and abundant stocks for key staple crops. The 2021 surge in food prices is largely associated with the recovery in food demand from the global COVID-19 recession and temporary disruptions in logistics, rather than with severe food supply disruptions or continued trade restrictions. The food price surge therefore need not last. However, even a relatively short-lived surge will affect food security for poor and vulnerable people, and the significant inflation of domestic food prices in many low-income countries is thus a concern.

To start, it is important to note that the drastic year-on-year change in international commodity prices observed in 2021 is in part the result of a “base effect”; that is, there was a rebound in prices from the 10-year low seen in May 2020. Prices had fallen with the economic contraction caused by lockdowns and other COVID-19-related restrictions on social mobility introduced in most of the world from March 2020.

Next, not everything is getting more expensive. Trends vary starkly by major food products (Figure 2).

Prices of rice, for instance, had increased before the start of the pandemic-related lockdowns in early 2020, but then declined as the COVID-recession began and some rice-producing countries phased out their export bans. After bouncing back with the global recovery, international rice prices have now fallen back to pre-pandemic levels, reflecting positive harvest and production prospects.

In contrast, prices for wheat, maize, and soybeans fell in the first half of 2020, then recovered during the second half of the year. This rebound, as well as a rebound in prices for nonfood commodities, was largely driven by the recovery of demand from China and, in the case of wheat, lower production levels following droughts in several major production areas (the United States, Canada, European Union, Turkey, and Iran). The surge in maize and soybean prices came to an end in the second half of 2021, however, following expected record production levels for maize in the U.S. and Brazil and greater soybean yields in the U.S.

In short, the recovery of global demand has been a key driver of the surge in international agricultural commodity prices, more so than COVID-related supply chain disruptions. Markets have tightened as a result of stronger-than-usual demand for animal feed and agricultural products for industrial use, with demand from China exercising major influence. Growth prospects for China’s economy turned less rosy by the end of 2021, however, and should be expected to weaken pressure on agrifood prices in global markets. Supply disruptions, which have been more closely related to weather conditions than to the pandemic, have had less influence on price surges. Although trade restrictions played a key role in exacerbating the global inflation of food prices during 2007-08 and 2010-11, they proved short-lived during the current crisis. The recent food price rise, however, could tempt governments to impose new trade restrictions, as is already happening in the cases of Russia (wheat), Argentina (beef), Indonesia (palm oil) and China (fertilizers). Other factors that influenced the upward trend in international food prices in 2021 include the rise of fertilizer prices, the depreciation of the US dollar (until mid-2021), and rising international freight costs.

Overall, however, markets for staple foods have been resilient, with global supplies remaining adequate and logistical bottlenecks proving short-lived.

This is not to say all is well. Rising prices in international commodity markets are threatening food security. The problem is most acute for the poor in low-income countries, where rising food import costs weigh heavily on economies and on personal incomes, as food accounts for about half of consumption baskets and 20% of imports. The rise in international prices for food staples explains about 40% of overall consumer price increases in low-income countries during the first quarter of 2021, a number much higher than in middle-income countries (Figure 3). 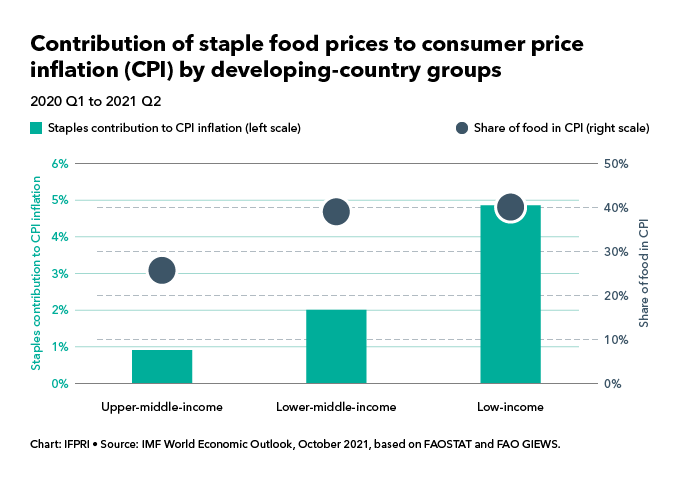 Rising food prices have a greater impact on low-income households, which spend a large share of their income on food. The surge in consumer food prices in many low-income countries partly explains the recent rise in global food insecurity. Additional evidence shows that the pandemic has been—and still is—detrimental to the quality of diets. The recession caused by lockdowns and other pandemic measures has driven households, especially poorer ones, to shift to cheaper, more calorie-rich staple foods at the expense of costlier nutrient-dense foods like fruits, vegetables, and animal-source foods. The rise in prices of more nutrient-rich foods, which has been far steeper than that of cereals, likely exacerbated this shift.

These trends are clearly worrisome. However, there is no reason to panic over the possibility of another global food price crisis. Production prospects for staple crops look favorable for the 2021/22 season, and global demand is weakening as the economic recovery in China and other major economies has slowed. While uncertainties remain, these conditions should be expected to reduce inflationary pressures in international commodity markets in 2022. Nonetheless, this may not provide solace to many poor people, as the global recovery is also slowing as the world faces new waves of COVID-19 cases. Poor farmers may earn higher incomes from increasing food prices, but most are net consumers of food. Governments of low-income countries have very limited fiscal capacity to protect the purchasing power of low-income families and prevent higher food prices from causing greater food insecurity and further deterioration of diets. Given the global ramifications of food price inflation, strengthening this capacity through additional financial assistance should be an immediate priority for the international community.