The Role of Food Systems in Closing the Global Emissions Gap

Environmental Sustainability of Latin American and the Caribbean Agrifood Systems

Globally, agricultural support is high—totaling about $600 billion annually—and continues to increase. The harmful impacts of subsidies on trade are widely known, but their harmful environmental impacts are less well-understood. This was the theme of a December 14 policy seminar organized by IFPRI in collaboration with the University of Adelaide, Australia (UA).

A recent study by the UA Institute for International Trade (IIT) confirmed that a significant part of agricultural support relies on policy instruments that are environmentally harmful and generate increased greenhouse gas emissions (GHGs), and that there are few constraints on these expenditures. IFPRI has analyzed the impacts of removing agricultural support on a variety of indicators measuring food security, nutrition, and climate outcomes and looked at the trade-offs of repurposing policies toward healthier diets and consumer incentives.

Not all subsidies are bad, but neither are they all good, said IIT Visiting Fellow Ken Ash. Thus, Ash said, addressing their environmental impacts is not about eliminating agricultural support, but about ensuring that support works as intended. This means that policy instruments chosen are well in line with their explicit objectives, and that inevitable trade-offs and unintended impacts are anticipated and considered in the decision-making process.

To facilitate that process, Ash said, two routes should be pursued: Making available information and analysis more accessible and understandable for policymakers; and creating a diverse coalition of stakeholders to weigh the information and clarify the issues.

IFPRI Senior Research Fellow David Laborde presented some of the organization’s work on the repurposing of agricultural domestic support in conjunction with groups such as the World Bank, the United Nations, and the Food System Economics Commission—including the effect of farm policies on agricultural GHG emissions and the potential environmentally friendly restructuring of various forms of support. IFPRI has also contributed to a 2022 report on repurposing subsidies and to the FAO report, The State of Food Security and Nutrition in the World 2022, with this topic as its theme.

Laborde used the slide below (Figure 1) to illustrate the role subsidies play in the complex decision-making surrounding farm policies. Environmental impacts extend beyond the country level, he noted, a factor that should be considered in any policy reform process. At the same time, he said, sometimes keeping things simple helps: One policy, one target. One of the current challenges is integrating Global South countries in such reform discussions. 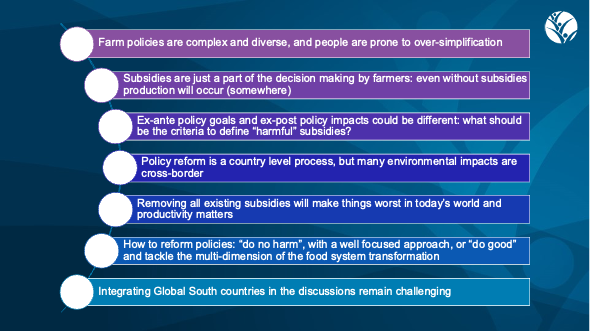 One issue in the reform process is inertia, said Lee Ann Jackson, Head of the Agro-food Trade and Markets Division, Organisation for Economic Co-operation and Development (OECD). “We have evidence and analysis talking about how existing policies, particularly agricultural support, create stickiness in terms of systems adapting economic incentives that keep farmers producing in a particular way,” she said, “so clearly we have evidence telling us that something needs to happen.”

A key problem, IFPRI Senior Research Fellow Joseph Glauber said, is that while most farm groups are on board with the idea of spending more to encourage practices that reduce GHG emissions or sequester carbon, they are much less interested in replacing existing support programs.

Many countries prioritize food security concerns ahead of mitigating GHGs, thus it is important to understand that the agriculture sector is connected to other sectors, said Sophia Murphy, Executive Director, Institute for Agriculture and Trade Policy (IATP).

No one is arguing for the total elimination of subsidies, but new approaches are required, said INAI Foundation Director Nelson Illescas. Current support should be better targeted to reduce the cost of nutritious food, increase sustainability, make trade freer, and increase farmers’ income, he said, though it is hard to find a balance between all these goals.

In the panel discussion, participants stressed the importance of effective communications strategies by governments and private sector. With longer value chains extending between farmers and consumers, it’s important to have feedback from communities affected by policy decisions, in order to craft better policies and build political support for reform. In addition, environmentally friendly market-based incentives can be key type of reform, with sustainability increasingly seen as a competitive advantage. Reforming agricultural subsidies is also a complex process requiring diverse solutions, participants agreed. While there is a need to target various goals, it would be a mistake to target too many with only a limited number of policy approaches.

Valeria Piñeiro is Acting Head of IFPRI's Latin America Region and Senior Research Coordinator with the Markets, Trade, and Institutions Division; Daniela Soto has a degree in international relations and is currently studying for a law degree.