Addressing the food crisis in Yemen: The private sector’s key role amid local conflict and global market disruptions from the Russia-Ukraine war

Suspension of the Black Sea Grain Initiative: What has the deal achieved, and what happens now?

The IFPRI Food Security Portal’s Excessive Food Price Variability Early Warning System is showing excessive levels of price volatility in the four major food commodities: Wheat, maize, rice, and soybeans, as well as for cotton. Markets for hard and soft wheat and soybeans had already been more volatile than normal since late 2021, well ahead of Russia’s invasion in Ukraine, which began on Feb. 24. That conflict, coming on top of the ongoing effects of the COVID-19 pandemic, has already contributed to spiking food prices, with possible major consequences for global food security.

Rising price volatility poses a distinct threat, as it induces greater market uncertainty, which affects production decisions, and can spur speculative behavior. Both would fan further food price inflation. What is driving the current price volatility, and what are its implications for markets and food security?

The dangers of high price volatility

Tracking food price volatility provides a temperature check on global food markets. When prices fluctuate, it is more difficult for farmers to make decisions about what to produce and how; businesses are more reluctant to invest in food and agriculture; and ultimately consumption decisions are affected through higher prices and/or lesser availability, particularly in rural areas that heavily depend on agriculture and among low-income households who spend most of their income on food.

Volatility was high during the 2007-2008 and 2010-2011 global food price crises. Prices of staple foods rose quickly, followed by a period of high price variability that created major uncertainty in food markets. The excessive price variability tool was developed precisely to provide early warnings of unusual price movements to market actors, including farmers, traders, investors, and policymakers.

Food prices were already high before the war. Poor harvests in South America, strong global demand, and pandemic-related supply chain issues had reduced grain and oilseed inventories and drove prices to their highest levels since 2011-2013. Prices of key energy-intensive inputs such as fertilizer were and continue to be at near-record levels. Then came the invasion, which is creating major market disruptions. Russia and Ukraine account for 30% of global wheat exports and supply millions of tons of wheat to food import-dependent developing countries in the Middle East and North Africa (MENA), South Asia, and sub-Saharan Africa. An ongoing war will certainly drive prices higher still and erode food security for hundreds of millions of people.

Looking back, most staple food prices also showed excessive volatility in the aftermath of the global food price and financial crises until 2012 (Figure 1). World market prices for basic staples were then calm for the most part until the recent rise in volatility. 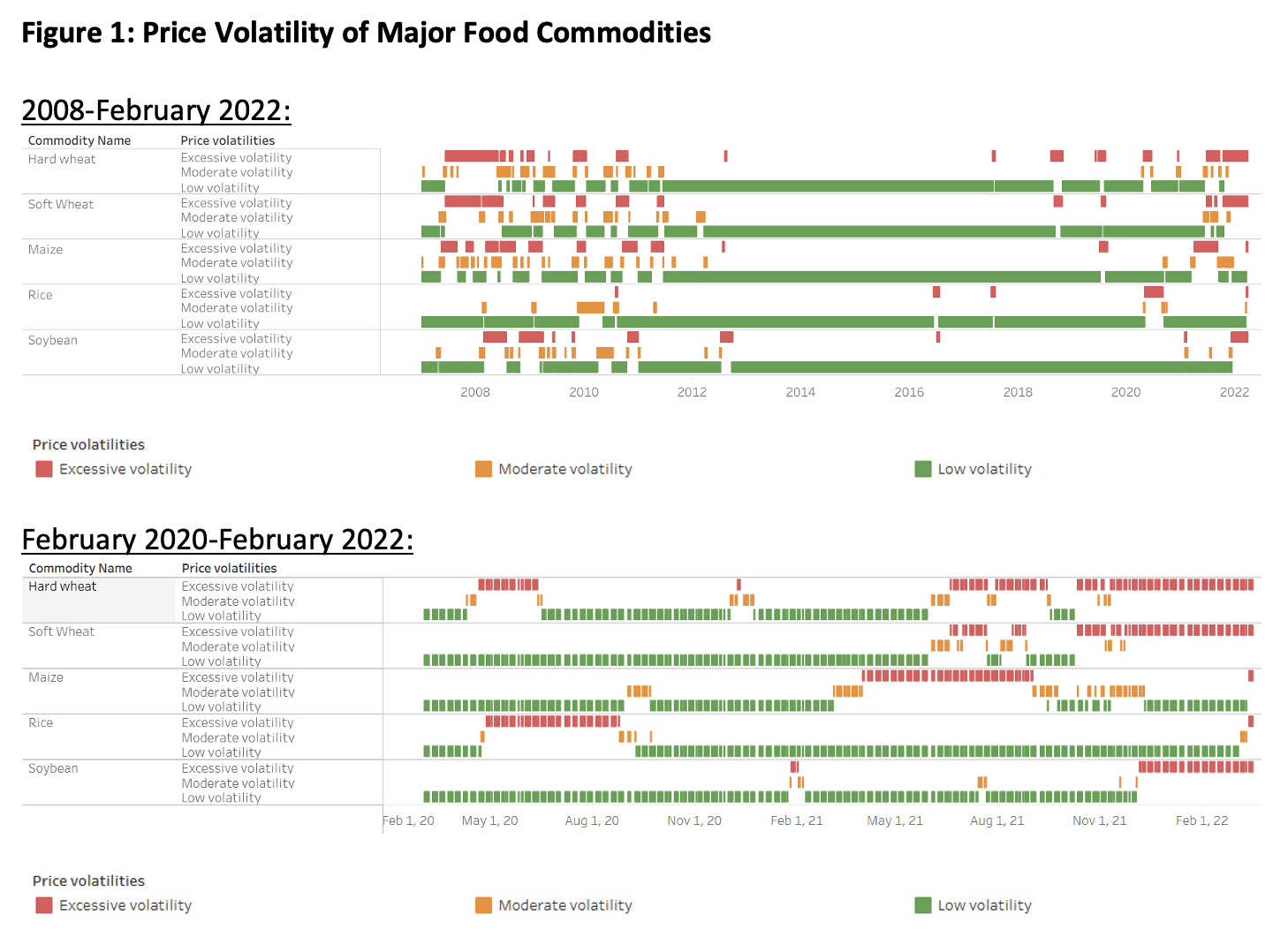 Among the major staples, prices of rice and wheat became very volatile following the onset of COVID-19 lockdowns, driven in part by export restrictions imposed by some major producing countries. Russia and Kazakhstan, for example, imposed export bans on wheat and Viet Nam imposed a short-lived ban on rice exports. In contrast to the 2007-08 global food price crisis, which led many countries to imposing prolonged trade restrictions, most of these more limited recent measures were retracted by mid-2020 and staple food markets returned to lower, “normal” levels of volatility. This period of relative calm lasted only through the first part of 2021, as the deepening of pandemic-related supply chain disruptions mixed with strong demand driven by the global economic recovery.

Price volatility has continued to intensify since reaching excessive levels for wheat, maize and soybeans in the final months of 2021. Markets for wheat and soybeans have remained volatile since, while that for maize returned temporarily to calmer waters. Following the invasion of Ukraine, however, maize prices again turned highly volatile, as did rice prices, so prices for all four staple foods are now in that state. Here is the situation for each:

The importance of monitoring food price volatility in the near term

Some conditions that contributed to price volatility following the initial COVID-19 lockdowns remain relevant now. Supply chain disruptions continue to be a factor, and tracking export restrictions is again important since such policies could lead food prices to spiral even higher.

One difference between the two periods is the scale of the disruptions in staple food markets. While the period of initial pandemic lockdowns saw some isolated volatility, the Russia-Ukraine war is affecting all major food staples. In addition, fertilizer prices are a greater factor now than at the beginning of the pandemic. Already at extremely high levels before the war began, fertilizer prices could continue rising as potash exports from major producer Belarus are cut off and Russia, another important fertilizer producer, is considering an export ban. High prices for natural gas, a feedstock for nitrogen-based fertilizers such as urea and ammonia, have boosted fertilizer prices as well.

Higher fertilizer prices could depress production, leading to less grain on the market in 2022 and putting further upward pressure on already-high food prices. With the conflict still unfolding and outcomes highly uncertain, monitoring food price volatility is more relevant now than at any time since the food price crises of 2007-08 and 2010-11—with the food security of millions at stake.