Can agricultural exports from Southern Cone countries make up for global supply disruptions arising from the Russia-Ukraine war?

Suspension of the Black Sea Grain Initiative: What has the deal achieved, and what happens now?

Russia’s invasion of Ukraine has led to the disruption, by sanctions or war, of two of the world’s largest grain exporters. This means 2022 is shaping up to be a very difficult year for the global food system.

Yet there were concerns that this system was creaking at the seams as far back as 2007. At that time there were steeply rising food prices driven by rising oil prices, explosive demand for corn-based biofuels, high shipping costs, financial market speculation, low grain reserves, severe weather disruptions in some major grain producers, and a swath of nervy trade policies leading to further shocks that worsened the problem.

The World Food Program’s director general described it as a “perfect storm.” Prices spiked again in 2011-12 before gradually receding.

In retrospect, those storms might now appear temperate in comparison to that we face in 2022. Even before the current crisis unfolded, food, fertilizer, oil and shipping costs were rising steeply.

Here are three factors that we think make the situation in 2022 much worse, and three measures that could help prevent a global food supply system collapse.

The poor are still recovering from the COVID-19 crisis

Back in early 2008, both the developed and the developing world had just experienced an unprecedented period of rapid economic growth and poverty reduction, in some cases after decades of stagnation. The global financial crisis of 2007-08 only briefly halted growth in the developing world. Many governments and international institutions recognized the need to re-invest in agriculture, and found resources to do so.

But fast-forward to 2022, and the world has not yet recovered from the tailwinds of the COVID-19 pandemic, the worst economic crisis since the second World War. There are no truly rigorous estimates of COVID’s impact on global poverty, but the World Bank has estimated that 2020 saw an extra 97 million people thrown into poverty. 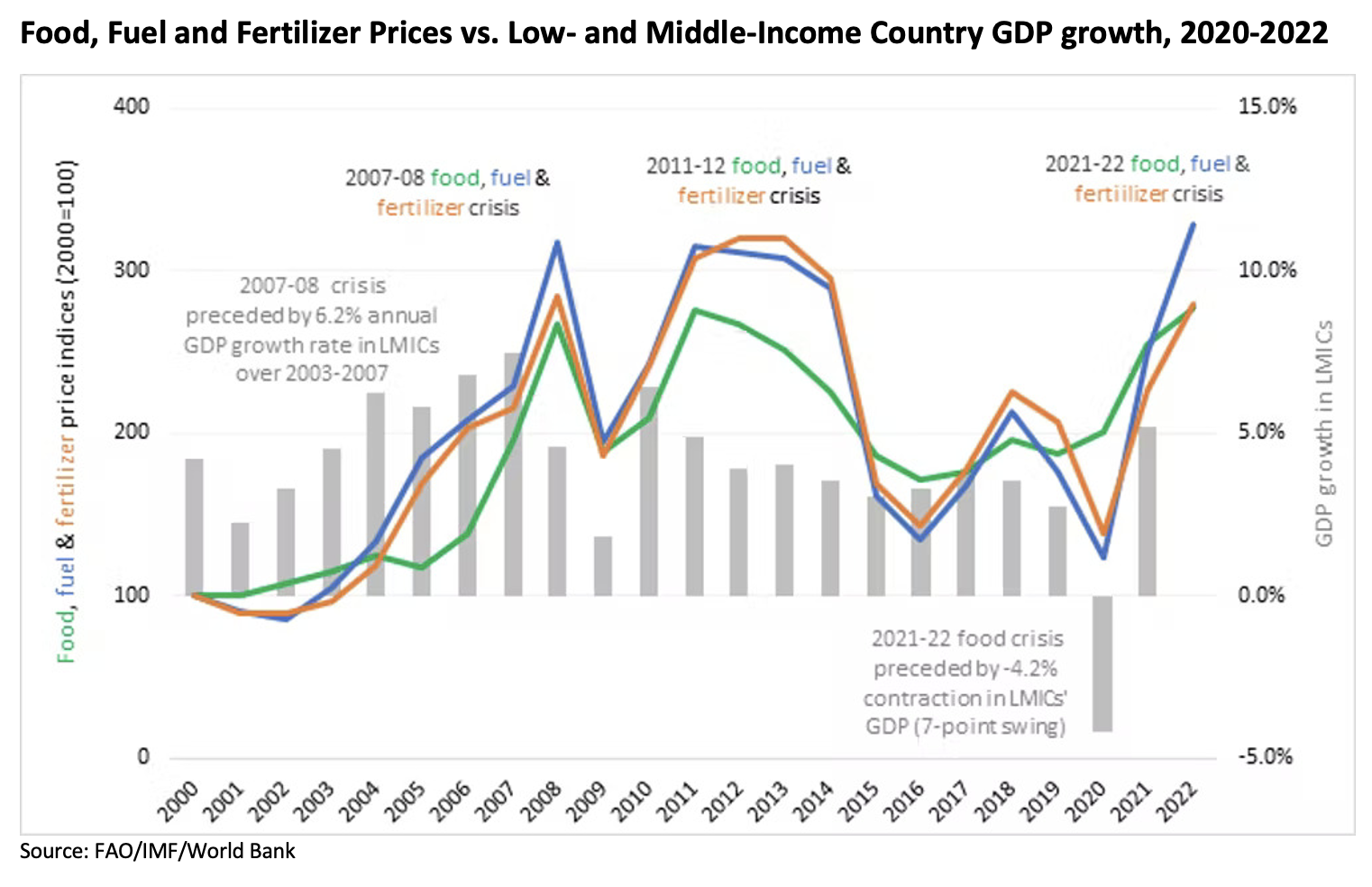 Household surveys and economic models consistently find that the pandemic had the most severe economic impact on the urban poor, while agriculture and the rural economy remained remarkably resilient to lockdowns and other demand shocks. Higher food prices may even have had a poverty-reducing effect in rural areas. But the urban poor lose out and, after two years of turmoil, are being hit hard again, now by food price inflation.

Both developed and developing economies are weaker today than in 2008. To their credit, governments in the developing world provided unprecedented protection for households and businesses and digital innovations for reaching the poor during the pandemic.

But as a result, many economies face large debt burdens relative to national income, as well as growing deficits, weak exchange rates, uncertain near-term economic growth prospects, and foreign investors and development partners that are also short of cash.

Africa is undoubtedly one of the most vulnerable regions. North Africa is a huge net importer of wheat, most of which comes from Russia and Ukraine, so it faces a particularly acute food crisis. Sub-Saharan Africa is predominantly rural, but its growing urban populations are relatively poor and more likely to consume imported grains.

Farmers in many parts of Africa are struggling to access fertilizers, even at inflated prices, due to shipping and foreign exchange problems. Exorbitantly high costs will erode farmers’ profits and could reduce incentives to increase production, dampening the poverty-reduction benefits of higher food prices.

Countries already affected by conflict and climate change are exceptionally vulnerable. War-ravaged Yemen is heavily dependent on imported grains. Northern Ethiopia is one of the poorest regions on Earth, facing ongoing conflict and a humanitarian crisis. And Madagascar was slammed by successive tropical storms and cyclones in January and February, leaving its food system broken.

In Afghanistan, child mortality rates are soaring due to the collapse of the economy and basic health services. Myanmar’s GDP shrunk by 18% after the military coup in February 2021, and food prices have since increased by 19%.

A crisis with no end yet in sight

The 2007-08 food crisis was relatively short lived, and the global food system responded swiftly with increased supply. But who can say with any confidence whether the effects of the Ukraine crisis on food, fuel and fertilizer prices will end any time soon?

Russia and Ukraine account for more than 30% of global grain exports, Russia alone provides 13% of global fertilizer and 11% of oil exports, and Ukraine supplies half of the world’s sunflower oil. In combination, this is huge a supply shock to the global food system, and a protracted war in Ukraine and the growing isolation of Russia’s economy could keep food, fuel and fertilizer prices high for years.

Three things that can be done

What can be done to buffer the worst impacts of this crisis?

Despite their sometimes dire fiscal circumstances, governments must again reach deep into their treasuries to reinvigorate this protection—and the international community must help them. There is simply no other alternative for averting a humanitarian disaster that will hit the developing world hard this year, and conceivably well in to years to come.