Do No Harm: Measured policy responses are key to addressing food security impacts of the Ukraine crisis

One of the world’s worst economic collapses, now compounded by the Ukraine crisis: What’s next for Lebanon?

The Russian invasion of Ukraine is likely to have serious consequences for global food security. The UN Food and Agriculture Organization has estimated that if there is a prolonged disruption in exports of wheat, fertilizer, and other items from Ukraine and Russia, the number of undernourished people worldwide could increase by 8 to 13 million people in 2022/23, with the most pronounced increases taking place in the Asia-Pacific region, followed by sub-Saharan Africa and the Middle East and North Africa (MENA).

Even before the crisis, agricultural commodity supplies were tight and market prices were at (nominal) record levels. Prices for most grains and oilseeds (figure 1) have risen sharply since the war began in late February. Russia and Ukraine together supply about 12% of global agricultural exports on a caloric basis, and over 30% of global wheat exports. The two countries command even higher shares in the wheat-dependent economies of the Middle East and North Africa, where wheat prices have risen over 30% compared to pre-war levels. Fertilizer and energy markets have seen rising prices and supply disruptions as well.

Given the potential food security impacts, particularly for the most vulnerable, many countries face difficult decisions. What approaches are best to limit impacts on the poor, maintain food availability, and cushion the blow of rising global prices—and what should be avoided?

In the short term, the primary message to policymakers should be "do no harm." Countries should refrain from enacting policies that could exacerbate price volatility and global shortages, or take precipitous actions that risk creating far more detrimental impacts in the long term. In particular, the price spikes of 2007/08 and 2010/11 and the more recent experience of the COVID pandemic have shown that policies designed to insulate domestic markets from external disruptions can have serious adverse consequences for others, particularly the most vulnerable.

The most effective measures to combat food insecurity will be those that aim to keep trade in food and fertilizer products open and to mitigate the impacts of high food prices on the most vulnerable with targeted assistance and humanitarian aid.

Since the invasion, sanctions against Russia have increased and come on top of existing measures taken after the annexation of Crimea in 2014. Trade sanctions are targeted to inflict economic pain on Russia in order for them to reconsider their actions, but it is important that trade and financial sanctions continue to exempt food products, and inputs like fertilizer. These products account for less than 5% of Russia's export earnings, but if sanctioned could have adverse impacts on global food security.

Russia’s exports of natural gas, a key feedstock for producing nitrogenous fertilizers, is a more sensitive issue due to its role in Russia’s economy (accounting for about 7% of its exports in 2019). While the European Union continues its purchase from Russia, any disruption in supply will have even larger consequences on European fertilizer production and farm input availability, than current high energy prices. Beyond European borders, the capacity to produce additional urea or ammonia is larger and mitigation options more available. Policymakers should consider the indirect effects of Western sanctions, and the impacts on third parties, like Turkey, that play a critical role in processing grains imported from Russia and reexport final or semi-transformed products to other low- or middle-income countries. Appropriate legal and technical support should be provided to partner countries and small and medium-sized enterprises (SMEs) to navigate new regulations. 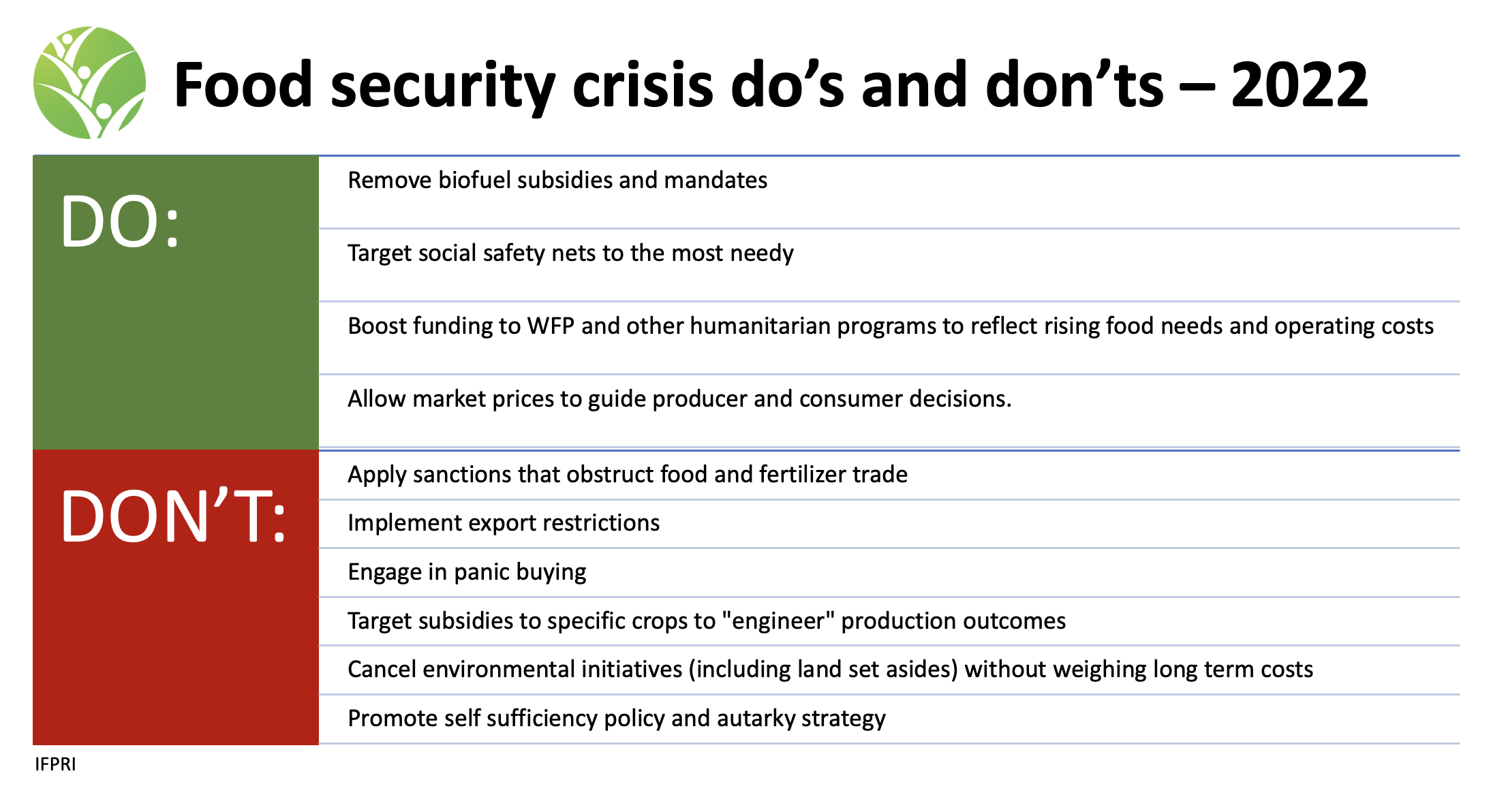 2. Countries should refrain from implementing export bans and restrictions

During the food price spikes of 2007/08 and 2010/11 and again during the first months of the COVID pandemic, a number of countries restricted exports in order to ensure adequate supplies at home. But export restrictions can also drive global prices even higher, making it even more difficult for net food importing countries to purchase food. Moreover, export bans tend to be contagious, as other exporting countries follow suit and implement their own bans. The way the global community handled this issue in early 2020 should be an example to follow now: Most countries refrained from implementing bans, and those that were implemented were relatively short-lived. However, the current trend is worrying, as shown in the IFPRI export restriction tracker and discussed here.

Panic buying can disrupt the orderly marketing of commodities and drive prices up in the short run. Supply hoarding—importing and storing many months of grain—can exacerbate price volatility and potentially be costly as prices fall over time as more supplies become available. With improved market information provided by international efforts such as the Agricultural Market Information System (AMIS), countries can make more informed purchasing decisions and hopefully avoid the panic buying that occurred during earlier price spikes.

4. Countries should target food subsidies towards the most needy

While the world will not run out of wheat, prices are likely to remain high for some time, and could go higher if harvest problems cause further drawdowns in global stocks. High food prices are difficult to absorb in poor households with limited resources that consume a limited range of foodstuffs. To avoid an increase in food insecurity, and as was seen in 2007/08 and 2010/11, food riots and increased political instability, countries have provided subsidies to keep food costs low. Accurate targeting is crucial to ensure that subsidies go to the truly needy and not to more prosperous households that can absorb increased food costs, or households that can readily switch to lower-cost alternative foods. Too often, existing schemes (e.g., in Egypt) are poorly targeted and waste significant resources, especially when rising prices increase the cost of running domestic food aid programs.

5. Countries should provide humanitarian aid through programs such as WFP

Some countries remain heavily dependent on humanitarian aid to meet food security needs. Higher commodity prices mean humanitarian aid agencies like the World Food Program will have to spend far more than previously budgeted to meet those needs. Countries in the position to do so should ensure that WFP and other organizations are adequately funded. To the extent possible, assistance should not be tied to national export interests—organizations like WFP operate most efficiently when they are able to source food from the lowest cost suppliers.

Global biofuel production is at record levels. In the United States, for example, over 35% of the 2021 maize crop will go to ethanol production, and over 40% of U.S. soybean oil production goes to biodiesel production. Globally, 31 million tons of vegetable oils are converted into biodiesel (figure 3), about 15% of global production—the equivalent amount of calories required to feed more than 320 million people per year. With vegetable oil prices skyrocketing (they are now around $1,600 per ton, after hitting $2,000 one week after the invasion), now is not the time to be encouraging the conversion of food crops to energy through artificial policy incentives or mandatory blending targets. While beneficial to farmers and landlords, such policies come at the expense of those who can least afford it, hungry people around the world.

As it is increasingly likely that supplies of key commodities from Ukraine and Russian will be severely disrupted for 2022, countries are seeking ways to boost global supplies to compensate. Policymakers should take care to ensure that any emergency measures they take do not lead to additional problems in the short or long runs; like previous crises, the current one will pass and agricultural prices will retreat to their longer term dynamics. Many emergency policy decisions have long term effects, e.g., damaging biodiversity, or contributing to climate impacts by releasing carbon or methane. In addition, policy U-turns reduce the credibility and predictability of policies undermining their effectiveness and reducing the collaboration of the private sector.

7. Countries should avoid introducing new subsidies to encourage production of one crop over another

Subsidies distort production decisions and obscure market signals, potentially having unintended consequences and costs for others. Moreover, once introduced, history has shown that subsidies are very difficult to remove, prolonging their impacts on global supply and demand.

8. Releasing land from fallow and long term set asides will not likely help in short run but new enrollments should be delayed.

The recent announcement by the European Union to allow fallow land to come into production and similar calls in the U.S. to release land from the Conservation Reserve Program will likely have little immediate impact on global food supplies. Much of the land has been out of production for many years and is of marginal productivity. It is unlikely that much land could be brought into cultivation in time for the current crop year and many of the environmental benefits of long term set-asides, such as carbon sequestration and biodiesel production, would be potentially lost. Record high prices will likely dissuade producers from entering new lands into such programs; countries may wish to delay enrollments until the end of 2022, when more will be known about the impacts of the war.

9. Safer alone? The trap of promoting food self sufficiency

When world markets are in turmoil, a traditional response, happily supported by domestic lobbies, is to relocate production within national borders. Subsidies and tariffs are the preferred policy tools, and building large domestic reserves a principal aim. Unfortunately, this response is factually and conceptually fallacious. World markets are more stable than domestic markets, because they are larger and more diversified. The global farming community is more flexible and able to react to shocks more rapidly than any individual country. For example, the world has two hemispheres and planting decisions to take place year round; by contrast, in a given country the adjustment period typically takes 12 months on average. Modern global value chains operate with less food losses than large public stock programs.

Self-sufficiency is also prohibitively expensive for most net food importing countries, many of which are among the poorest in the world. The world will become less, not more food secure, if countries resort to self-sufficient policies that expose them to production uncertainties caused by drought, floods, pests, and animal or plant diseases—all increasingly frequent with climate change. Policies should not segment markets, but aim at creating more opportunities for a larger number of countries—helping global markets to become more diversified and inclusive.

Russia's invasion of Ukraine will likely mean that high agricultural prices continue through 2022 and likely into 2023. Unfortunately, most policy responses, however well-meaning, are unlikely to provide much short-term relief, and could exacerbate global price increase and instability. The best approach may be the simplest: Allow markets to work by removing distortions, and support the most vulnerable countries and households via social safety nets, and where most needed, through humanitarian assistance. The current crisis presents a number of immediate humanitarian challenges (particularly for those in war-torn Ukraine), but over time, markets should eventually return to more normal patterns. In the meantime, as countries take action to respond to high prices and other fallout from the crisis, they should take care to avoid exacerbating the impacts for others.

Joseph Glauber and David Laborde are Senior Research Fellows with IFPRI's Markets, Trade, and Institutions Division. Opinions expressed are those of the authors.