Big costs, bigger rewards: How $33 billion in spending each year can help end hunger sustainably by 2030

The Ceres2030 project has shown the urgent need for additional investments—a yearly average of $14 billion from donors and $19 billion from low-income countries for the next decade—to meet Sustainable Development Goal 2, ending hunger by 2030, and to build more sustainable food security.

But how should that money be spent?

The latest cost report from Ceres2030 (led by IFPRI, the International Institute for Sustainable Development (IISD) and Cornell University) outlines how the $33 billion in new annual spending should be structured in order to maximize its effectiveness. Modeling shows the additional investments could prevent 490 million people from experiencing hunger, double the incomes of 545 million small-scale food producers and help to restrain agricultural greenhouse gas emissions. The timing is urgent; delays in this spending will have human costs and increase the total costs, while spending early will yield bigger returns.

This portfolio benefits from the synergies of interventions and shows why it’s necessary to fund all interventions together for best results (also discussed in a Nature Research special collection). For example, a fertilizer subsidy might help farmers increase their yields. But, if the cost of getting the extra produce to market is too high due to poor road infrastructure, then the subsidy may not be very effective.

Figure 1 lays out an optimal timetable for each category in the additional $14 billion in average annual donor spending (on top of the $12 billion already spent annually by donors, in grey).

“On the farm” interventions require the most investment. Overall, they take longer to mature and yield returns, but those returns can be higher. For example, agricultural research and development, which falls in this category, can be highly cost-effective but takes considerably longer to yield benefits than social safety nets. Social safety nets fall under “empower the excluded,” and should be scaled up towards the end of the investment period to help end hunger sustainably by 2030.

The need for additional donor contributions in the form of official development assistance (ODA) is significantly higher in Africa than in other low- and middle-income regions; more than half of global undernourished population will be concentrated in the continent by 2030. Figure 2 illustrates that the funding gap by category of intervention is distributed differently across regions, with Africa notably requiring a relatively high proportion to be spent “on the farm.” 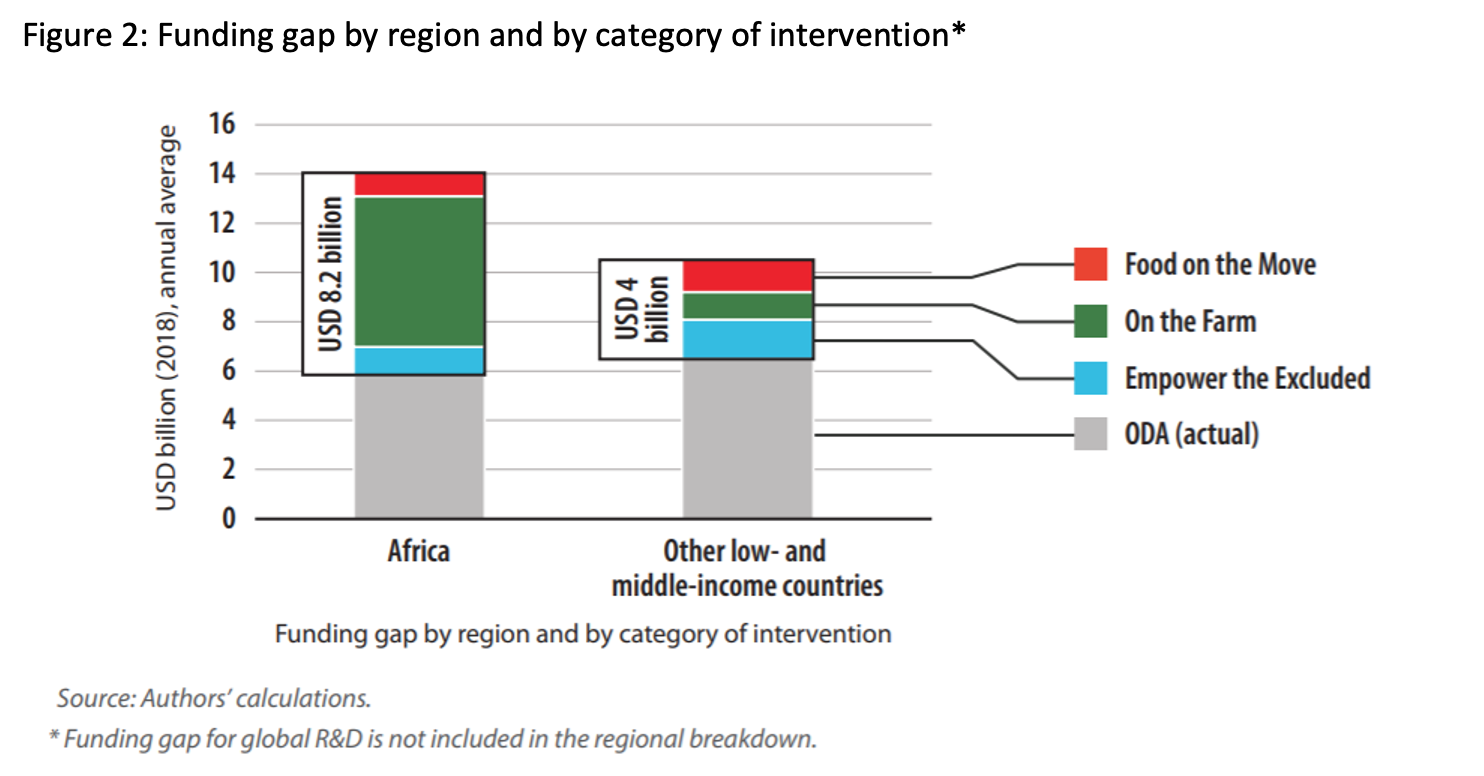 The Ceres2030 reports use a computable general equilibrium (CGE) model to estimate the additional public investment necessary to end hunger, double incomes of smallholders, and protect the environment by 2030. The model captures household characteristics and regional, sectoral and international interactions, minimizing the total public costs of achieving the targets by optimally allocating financial resources among 14 policy instruments.

Resources are allocated to households with the most need, but the model intentionally does not assume perfect targeting due to the difficulty of observing some quantities, such as hunger status. As the model takes into account complex economic relationships, it represents direct as well as indirect and interactive effects of the interventions.

The cost of hunger is calculated by comparing a “business-as-usual” scenario, based on demographic growth, yield projections including climate-related effects, and economic growth, to a scenario where sufficient investment is made to end hunger sustainably. Based on current data, the report finds that 660 million people will be affected by hunger in 2030 absent the recommended interventions.

Rising hunger, compounded by the COVID-19 pandemic, continues to reverse decades of progress. If governments and donors do not boost spending by an additional $33 billion annually, then many low- and middle-income countries will not be able to achieve the end of hunger by 2030.

Read the Ceres2030 report, Ending Hunger, Increasing Incomes, and Protecting the Climate: What would it cost donors? or visit the website for more insights from the project.

Swati Malhotra is a Communications Specialist with IFPRI's Markets, Trade, and Institutions Division.